Whilst ‘Munro bagging’ has been a Scottish passion since the 1970s, it’s a little known fact that the Victorians have been ‘bagging’ waterfalls since the turn of the last century and that there are well over 1000 waterfalls compared to a mere 282 Munros.

‘After breakfast, we made a party to go and see Cauldron Linn, a remarkable cascade in the Devon basin, and after spending one of the most pleasant days I have ever had in my life, I returned to Stirling in the evening’

But since those heady Victorian days, the paths have become overgrown, and  many of the waterfalls have all but disappeared from our maps. Yet these hidden natural gems are all around us in the unlikeliest locations; by the side of a motorway, near city centres and up hidden paths, in the last great wilderness that is Scotland. It’s just a matter of finding them.

Now Walks & Waterfalls sets out to re-discover the Victorian passion, in a new digital experience, sparking a national treasure hunt, mapping out hidden locations and paths to hundreds waterfalls and wild sting places in a specially designed app.

At the heart of the app is an environmental message – in order to preserve and enhance our precious countryside, Walks & Waterfalls will actively support tree planting and re-wilding schemes including supporting our partner ‘Trees for Life’, in their efforts of rewinding the Scottish Highlands.

Alongside the app, Walks & Waterfalls will publish a series of guide books to accompany the app as well as special edition coffee table book, with quotes and entries from the likes of; Burns, Robert Louis Stevenson, Sir Walter Scott, Wordsworth,  and a host of contributions from contemporary artist, poets and film makers, alongside images from award winning photographer Oscar Van Heek.

Walks & Waterfalls will launch in Scotland followed by England, Wales and Ireland. 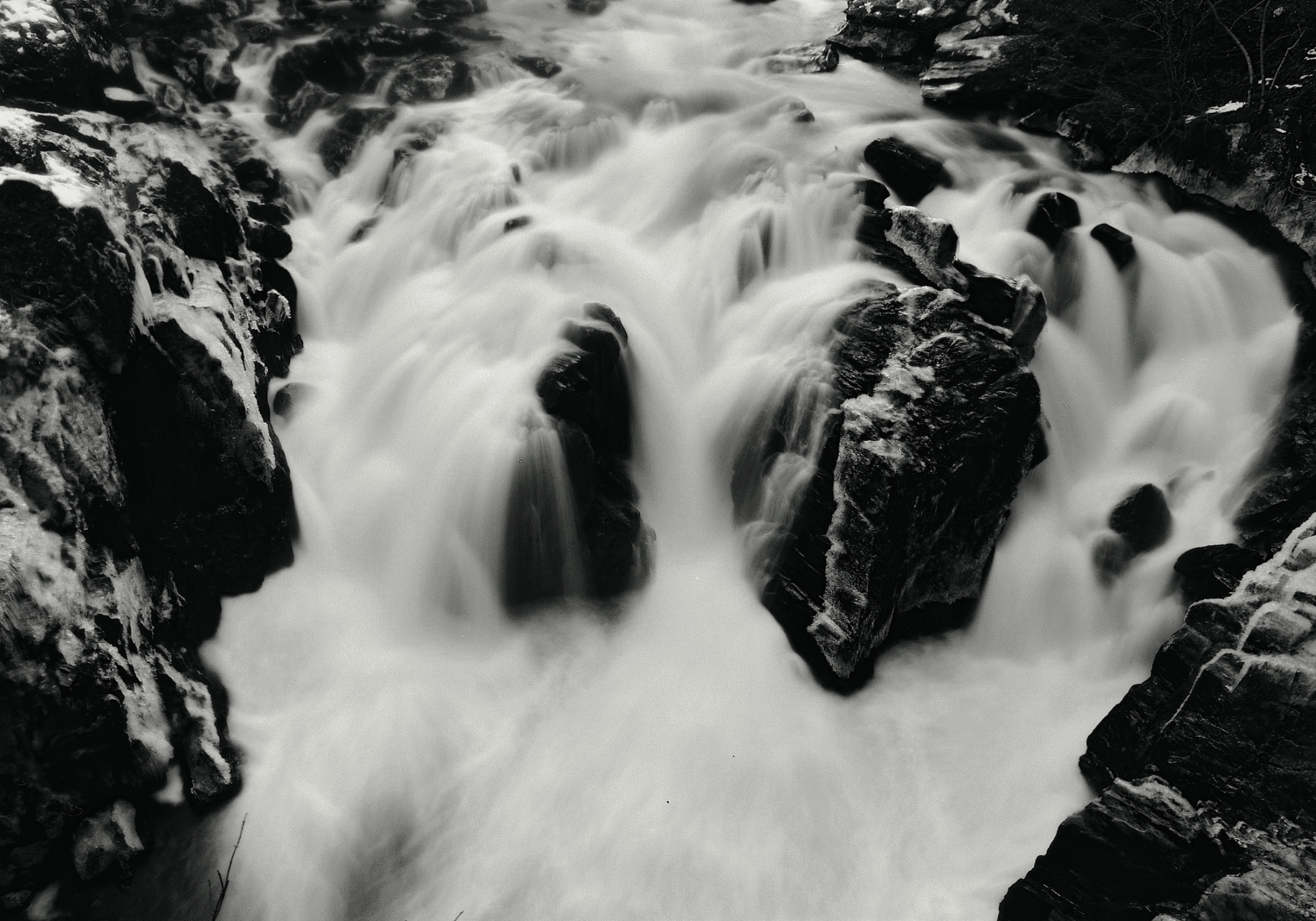 After breakfast we made a party to go and see Cauldron Linn, a remarkable cascade in the Devon about fives miles from Harviestoun; and after spending one of the most pleasant days I ever had in my life, I returned to Stirling in the evening.

The falls that once used to be on everyone’s itinerary, are no longer marked on any maps, and they are awkward to reach because the paths are overgrown. The best approach is from Muckhart Mill, but they can also be tackled from the footpaths along the spectacular Devon Valley Railway.

At the Linn of Dee the river narrows to a little over a meter in width. The channel is cut in schistose rocks and below the present falls there is a series of round pools. Downstream is a small dyke that probably marks the site of the original fall. It is possible when the water is low to step across the stream safely however it was here that young Byron caught his lame foot and was saved from a fatal fall by a companion.

In the course of one of his summer excursions up Dee-side, he had an opportunity of seeing still more of the wild beauties of the Highlands having been taken by his mother through the romantic passes that lead to Invercauld, and as far up as the small waterfall, called the Linn of Dee. Here his love of adventure had nearly cost him his life. As he was scrambling along a declivity that overhung the fall some heather caught his lame foot, and he fell. Already he was rolling downward, when the attendant luckily got hold of him, and was but just in time to save him from being killed.
Lord Byron his letters and journals by Thomas Moore

The ornamental granite bridge at the Linn of Dee was opened by Queen Victoria in I857.

In the late summer of 1787, Robert Burns set out on a tour of the Scottish Highlands. He had been invited to stay at Blair Castle, by the fourth Duke of Atholl; his lordship advised the poet to be sure to make the detour to view a local beauty spot, the necklace of falls known as Bruar Water.

Burns loved the falls, and declared later that these two or three days were the happiest of his life. He found Atholl picturesque and beautiful but was however critical of the lack of trees and shrubs. In true Burns style he wrote a poem to the Duke of Atholl, begging him to re-vegetate the treeless hillsides.

His poem with its jaunty characterisation of a highland stream provides a splendid memorial of his visit.

Would then, my noble master please
To grant my highest wishes,
He’ll shade my banks wi’ tow’ring trees
And bonie spreading bushes.
Delighted doubly then, my lord
You’ll wander on my banks,
And listen monie a grateful bird
Return you tuneful thanks.

Excerpt of Burn’s poem ‘The humble Petition of Briar Water’

The duke took note and the larch woods for which his estates became famous were created by Duke of Atholl, who became as known as the ‘planting duke’. 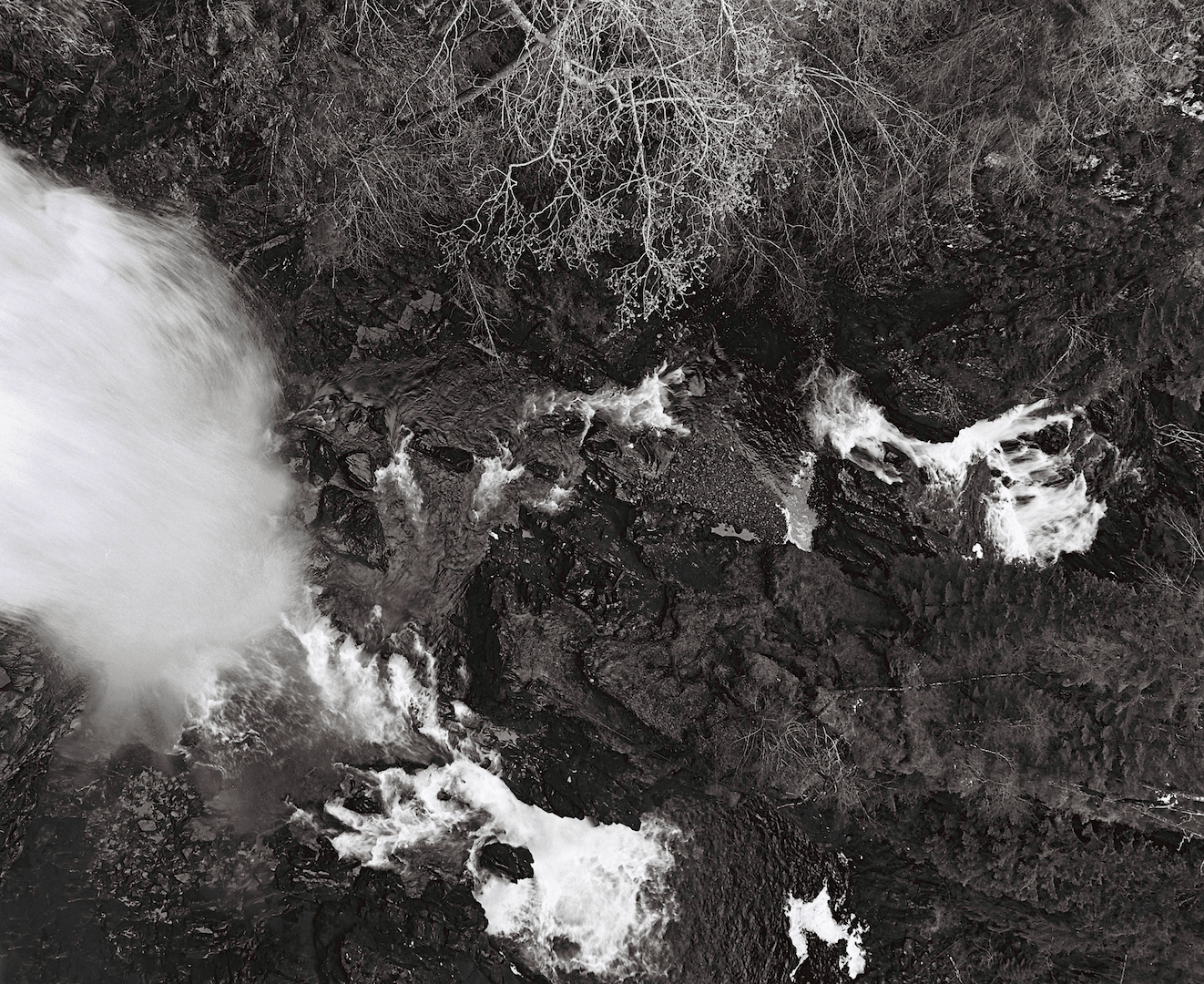 Plodda Falls is the highest and most spectacular waterfall in the area, over forty meters high, they form the climax to a pleasant walk through a magnificent forest of Douglas Fir.

There are two trails from the car park. The Falls Walk takes about half-an-hour; the longer Tweedmouth Walk leads more comprehensively through the policies that contain magnificent specimen trees planted between 1895 and 1905. Many of these trees are considered to be of the highest quality in Britain, and the Douglas firs at around 200m tall are amongst the tallest.

The path leads to the top of the falls. The burn supplying the fall, seems unpromising at first, but soon a pleasant cascade of about eight meters is seen. Shortly after this it becomes apparent that the main river is far below in a deep gorge and that the burn will have to make a sensational descent if it is to join it.

This it does, quite vertically, under a cast-iron ornamental bridge from which there is a view of the river thirty meters below.  A breathtaking sight. 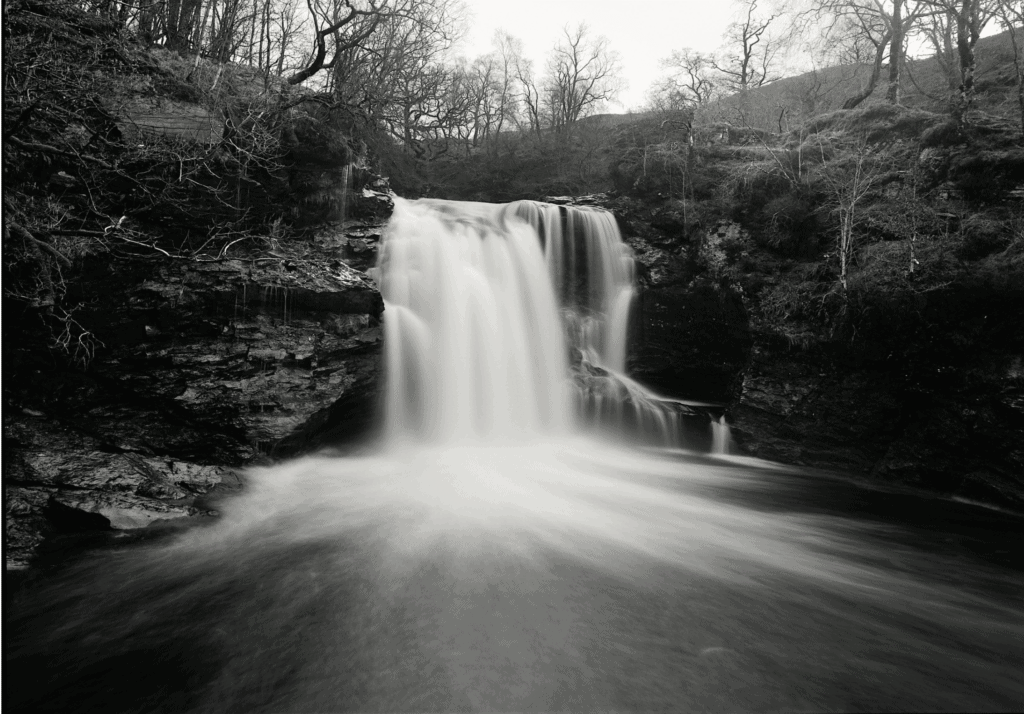 At the principal fall, the water plunges over a rock lip into a basin, the main stream falling ten meters sheer. This is Rob Roy country and the basin is dubbed Rob Roy’s Bathtub. A smaller hollow, etched by a lesser arm of the stream in the wall of the basin is called Rob Roy’s Soap Dish although it is unlikely that the famous raider and cattle thief used that commodity when in these parts.

Many writers of whom Dorothy Wordsworth is perhaps the most famous, have celebrated the falls at Glen Falloch. She gives a memorable account of her walk to the falls with her brother, William, and Coleridge:

We sat down and heard, as if from the heart of the earth, the sound of torrents ascending out of the long hollow glen. To the eye all was motionless, a perfect stillness. The noise of waters did not appear to come from any particular quarter; it was everywhere, almost, one might say, as if ‘exhaled’ through the whole surface of the green earth. Glen Falloch, Coleridge has since told me, signifies the hidden vale; but William says that if we were to name it from our recollections of that time we should call it the Vale of Awful Sound.

This is perhaps the most frequently visited and best known of all Deeside falls, apart of course, from the Linn of Dee itself.

The Linn is an open fall where a substantial body of white water is hurled with considerable force by means of two leaps into a deep pool. A steep ‘salmon ladder’ pass has been hewn into the rocks on the west bank to enable salmon to climb what must be one of the most abrupt obstacles to be surmounted by this means. The Linn of Muick is ten meters high. Common folklore had it that the pool beneath the falls was supposed to be bottomless.

The road climbs beyond the falls out of Linn Wood towards the Loch. On the opposite bank, Princess Drive runs close to the river. 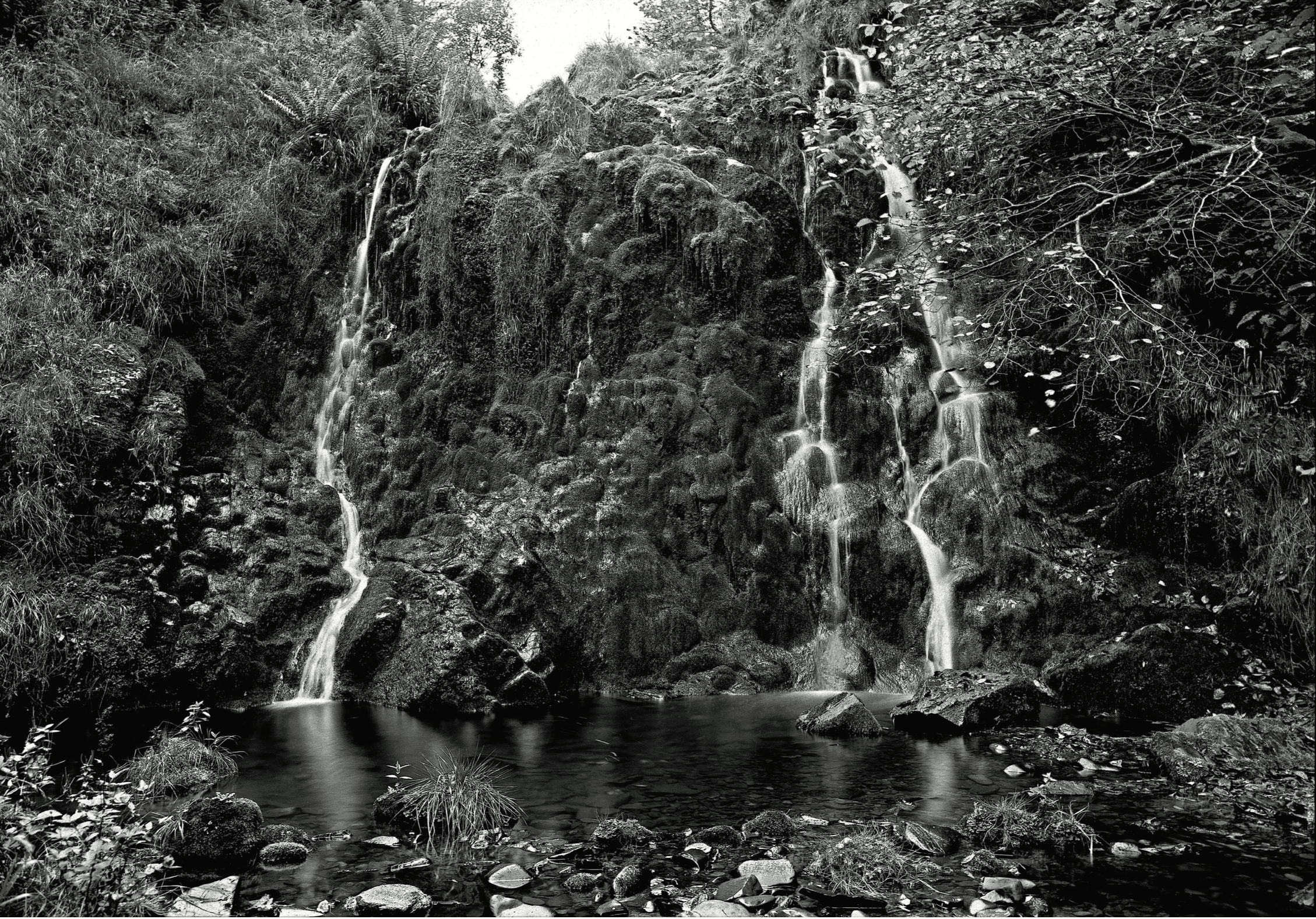 A trail leads from a car park beside the Althouse Burn which is a modest stream almost hidden in the woods. There is a great variety of bird life and at least one pair of herons nest there. The fall is on a tributary where the valley narrows and it is hidden in the trees until the last moment.

A large vertical fall of the apron type, is impressive in winter, and can be spectacular after heavy rain when it is a twenty foot high curtain of roaring foam water. In the summer though it can be a quiet place with ferns and mosses, damp grasses and sunlight dappled through overhanging branches into slow pools below. 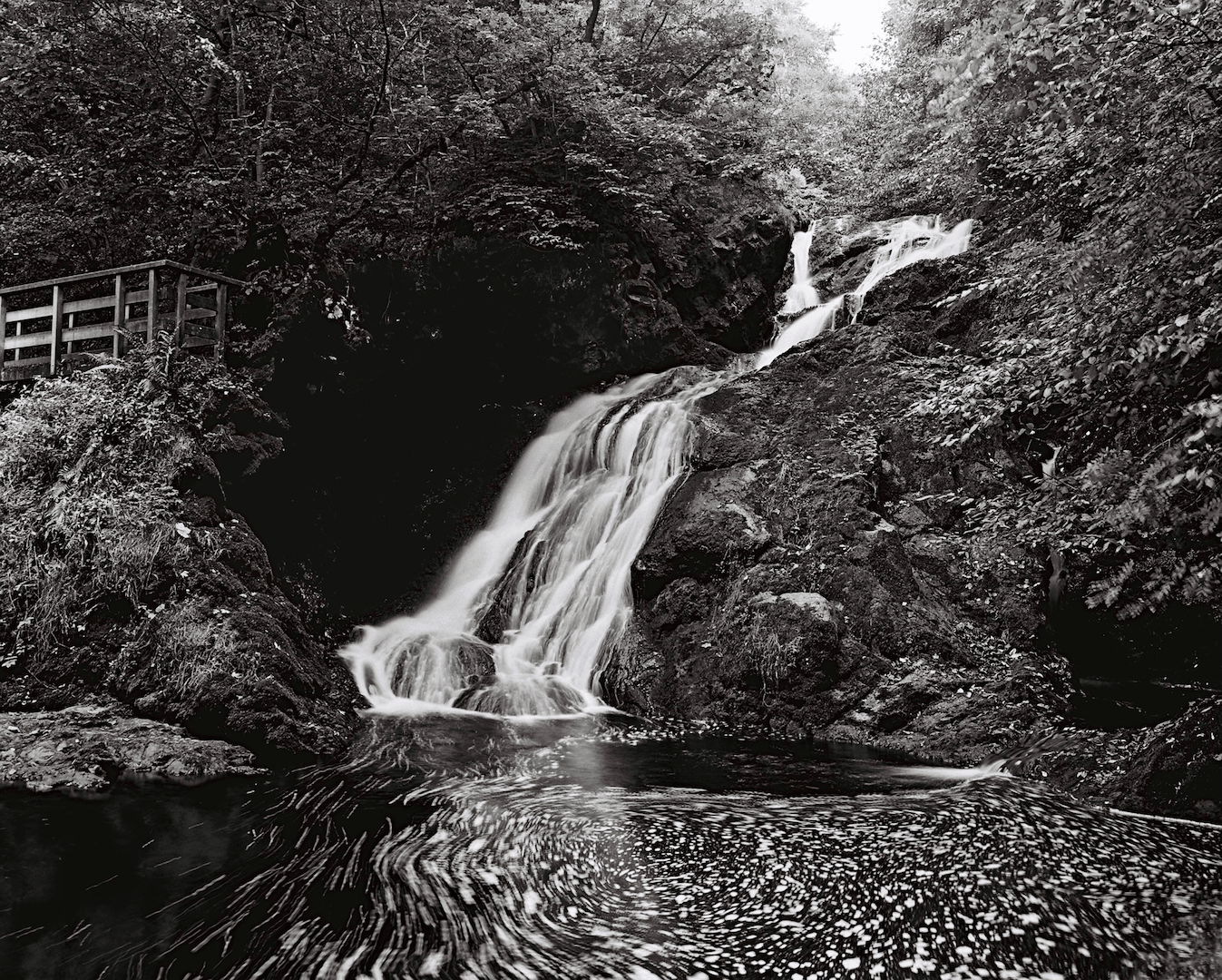 The Spectacle E’e (eye) waterfalls – so named as a result of an incident involving a local man who fell in love with the miller’s daughter. The miller disapproved of the union and ended their relationship. As revenge the lad placed an eyeglass in the mill’s thatch, causing it to catch fire and the mill to be burned to the ground.

The Spectacle E’e is the most imposing fall in the basin of the Avon, it is approached from the village of Sandford, past Tweedie Mill. The Kype Water falls into the Avon at the edge of the carboniferous lavas that make up the hill country beyond Strathaven and forms a series of picturesque falls culminating in a fall of fifteen meters.

The walk to Glen Burn Falls takes you into Glen Vale, one of the finest glens in the Lomonds. To get there you first descend to the Devil’s Burdens. This is a straight line of massive, weathered boulders. The Devil is supposed to have dropped these from his back as he flew over the Lomond Hills.

At the top end of the secluded valley, is John Knox’s Pulpit – a secret congregation spot at the time of the reformation. The site formed a natural amphitheatre from which a few carefully positioned guards would have been able to warn of any approaching lawmen. An angel with a drawn sword is said to have appeared on top of the pulpit, protecting the minister who spoke within. Whilst part of the cave is still there to be seen, the rocks that formed the pulpit were removed in 2004 because they were deemed unsafe.

A short distance from John Knox’s pulpit is the site of a beautiful secluded waterfall.  It is not the most breathtaking nor the most imposing, but it is one of the most picturesque of falls.  It is unusual in that you can walk right up to the fall, and bathe your feet in the shallow pool at its base. On a sunny day, it is hard to beat for a beauty spot. 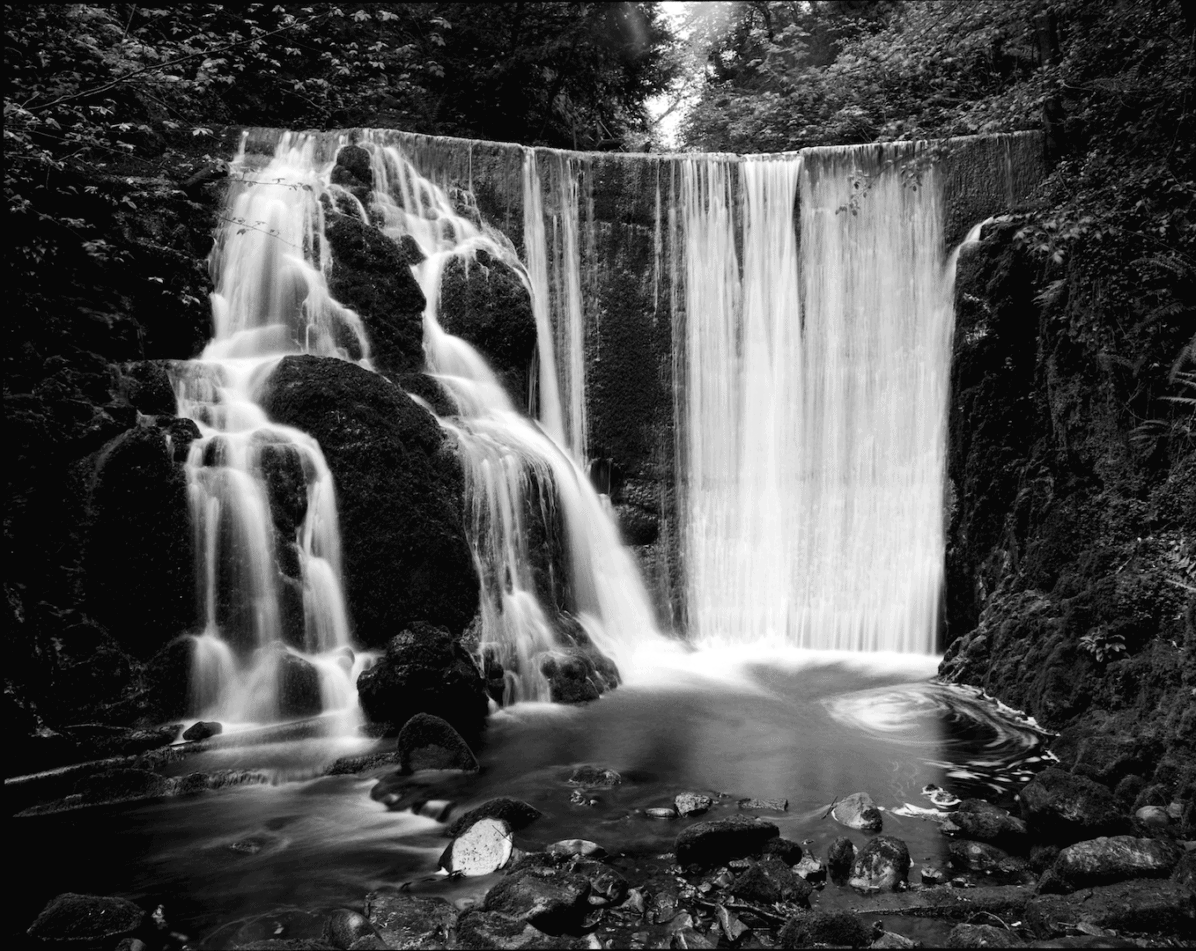 Alva Glen is the finest of the four main Ochil Glens. Every year the waterfalls in the glen are illuminated by coloured lights. These Alva Glen illuminations have been attracting people from all over Scotland for many years.

The highlights of the glen include the 23m Craighorn Fall and the Big Fall, a hidden waterfall that cascades magically into the Smuggler’s Cave.

Beyond the impressive Craighorn Fall, a well-marked miners’ track leads down Silver Glen with its famous old mines. These mines were once assayed by Sir Isaac Newton, when he was Master of the Mint, as he wanted to determine the quality of the silver for himself.

There are four noteworthy falls in Silver Glen. Other falls in the neighbourhood of Alva include those in Balquharn Glen, which are the most difficult and awkward to access in the Ochil Glens.